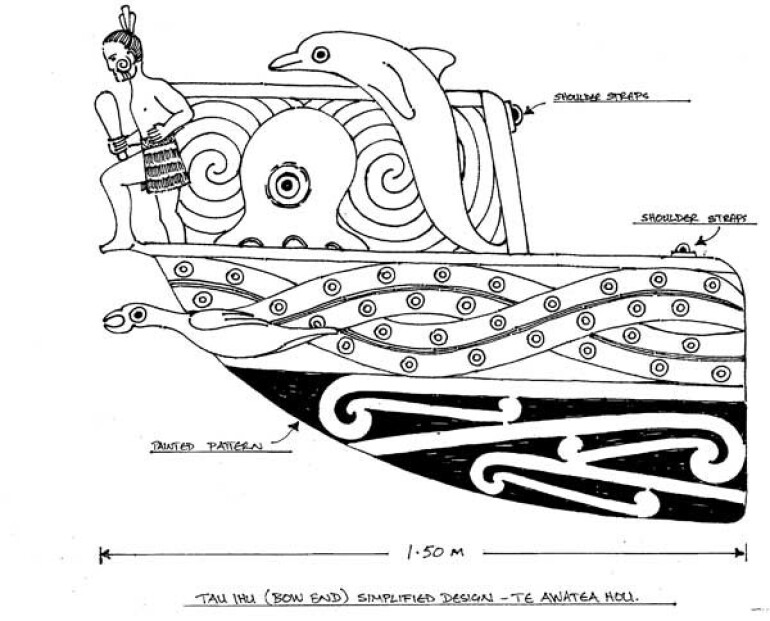 The Journey of Kiwa and Paoa

In ancient times a great canoe named the Horouta was part of the great migration. It was captained by Kiwa and Pāoa. The Horouta landed at Ahuahu (Great Mercury Island) and Ōhiwa Harbour, where it needed repairs to its haumi.

Pāoa walked inland and climbed Haumai Maunga to find a suitable tree to repair the haumi. He said a karakia to the atua Tane to guide him. Unable to carry the large tree back to the waka, Pāoa created the Waipāoa, Waioeka and Mōtū awa into being and floated the tree down to the coast.

After the canoe was repaired, Kiwa sailed it around the East Cape to Tūranganui (Gisborne). Kiwa named this place Te Tūranganui-a-Kiwa (the great standing place of Kiwa). While Pāoa had been working, the crew of the Horouta had gone into the forest to find birds to eat. Pāoa’s kuri went with them but did not return.

As he waited and called for his kuri to return. He spotted him coming from the cliff to the west of Gisborne. Pāoa named the cliff Te Kurī-a-Pāoa (the dog of Pāoa).

Many years later Captain James Cook sailed to Aotearoa from England on a voyage of discovery. As they sailed across the moana, land was spotted in the distance.  Captain James Cook named the cliff west of Gisborne Young Nick's Head, in honour of the cabin boy Nicholas Young from the Endeavour who first sighted it.

The Endeavour sailed into a bay, and laid anchor at the entrance of Tūranganui. Captain Cook wanted to name this place Endeavour Bay, but this place had already been named by the great captain Kiwa.

God of the forest – Tane